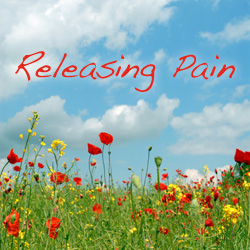 Little did I know, my visit to Uncle Norman would relate to a guided meditation for pain decades later. Growing up, I had an uncle who was a dentist. Uncle Norman had a sense of humor that could well be described as “droll”. As he was preparing to stick a needle in my mouth he would say something like, “Don’t worry Max. This won’t hurt me.” As I got older he’d say, “Relax, Max, and it won’t hurt as much. You’re into meditation, aren’t you?” A laugh a minute, that guy.

But actually, he was totally right. You can use meditation for pain, and it helps. I went to the dentist a few weeks ago, and found myself going right into my meditation practice, taking slow, deep breaths. I got all surrounded by angels and spirit guides, and by the time I was through I actually felt like I was floating out of there. (No laughing gas was used, I swear.) I even got a free tooth brush, which hardly ever happens at the dentist, right?

As I enter into what decade of life I’m not going to say, I find the aches and pains are starting to accumulate. For some of my friends and clients it’s a major concern. For many, fibromyalgia, arthritis and other problems are beginning to effect quality of life. Eventually it can become a balancing act trying to find alternatives to addictive pain medication.

So it’s interesting to me that guided imagery has been used to treat pain for decades. My wife actually began her chiropractic practice long ago in a “pain control clinic” in Los Angeles where they did guided meditation with clients as a matter of course. I believe they still do.

Two people can have exactly the same physical conditions as seen in an MRI, where one experiences pain and another doesn’t. So, what’s going on there? Perhaps it’s all about the mind body connection. And nothing works the mind-body connection so well as guided imagery. (Unless you happen to be a hypnotherapist, in which case you’d say nothing works it better than hypnosis. Potato, potato — it’s the same thing.)

It’s true. Depending upon the situation, we can train our minds to dismiss pain, or even to make small adjustments in our bodies so that pain is not triggered. And where the cause of illness and/or pain has an emotional component (which is usually), guided imagery can be used to clear it, contributing to a cure. So, I made a guided meditation for pain, and all of that. It’s called Releasing Pain. You can check it out and give a listen on my guided imagery site, at The Healing Waterfall. Feel free to buy a copy — that is if you’re “into meditation” as Uncle Norm would say. Don’t worry, it won’t hurt me.