I recently had the unique experience of revisiting a project I began 28 years ago, the The Healing Waterfall meditation program, to work on its third and final installment. It’s just coming out now. When I made the first one it was very much a seat of the pants type of experience, something I fell into and felt my way through. (A little like life itself.) Although it was actually the second guided meditation I’d made, it was still all very new. After writing a draft of the script, I enlisted an actress my wife knew (Jill Andre) to do the narration. People still comment on how perfect for it her voice is, but really she was the only person we knew who we though could do it at the time. 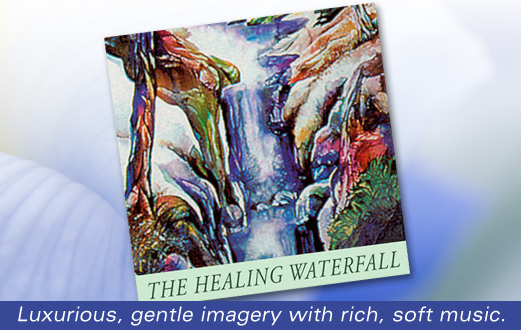 I remember being in the recording studio laying down music tracks behind the voice. First I put on piano, then a series of synthesizer tracks one by one. The engineer began to say something like “They don’t usually do it quite this way…” I looked at him, and he said, “But actually never mind, it sounds fine.” I don’t know what gave me the self assurance to just go with it, but on some level I knew what I was doing, despite the fact that I had no clue what I was doing!

An artist I knew (Meredith Miller) provided the cover material, and once the project was recorded and mixed there was a lot of running all over town to get the various design and printing services done to make cassette inserts. I remember thinking “This is taking an awful long time to put together”.

The amazing thing about it wasn’t how it got done, but that The Healing Waterfall meditation came together so well, in particular the way the narration and music fit together so well. That was especially surprising since I had no previous experience in composing or scoring music, other than writing some songs.

I think of this situation as one in which it was meant to happen, and the project was being looked over and orchestrated (literally and figuratively) from on high. And I consider myself very fortunate to have been the one it fell upon. It was one of those gifts that I must have earned in a previous life, or maybe the angels just like to pour down love on us and I happened to be standing in the right place.