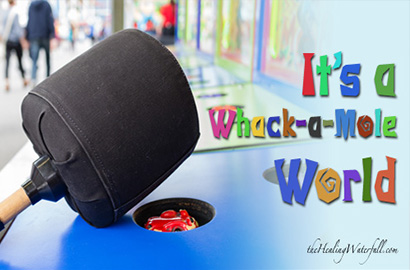 Because of the varied nature of my work, I typically have a handful of different projects going on at any given time. And like most things in life, some parts of my projects are beyond my control. Occasionally, when life feels like giving me a break, everything goes smoothly. But usually there’s some cause for concern, somewhere, drawing my attention. It’s a whack-a-mole world, after all. It was like that this morning.

What, you don’t know whack-a-mole? It’s that carnival game where a mole pops up from one hole, you whack it, and another mole pops up from another hole. It might get a bit frustrating, but that’s just part of the game, so it’s fun. And because it’s a game, when you’re done, you’re done, and you can have a hot dog. Or a tofurky dog, if you prefer.

In real life, I suppose if you’re a professional exterminator, you can also go about your mole whacking without getting upset. It’s nothing personal, and after all, a job’s a job, and when it’s done, it’s done. You can have a beer. Or an ale. Or some water.

But in the game of life, we all tend to get attached to things. Things like our relationships, our children, our bank account, our possessions, and our reputation. When we care about something, and have an investment in how it may or may not change, things get sticky. And when things get sticky, we get stressed. And by stressed, I mean worried, angry, fearful, sad, or otherwise upset.

What about detachment, or non-attachment – wouldn’t that be a good idea, as a way of life? Well it looks good on paper, but simply put, we care about what we care about. If you spend your life meditating by yourself in a cave, maybe once you get over the poor accommodations, eventually you won’t care about anything, and will achieve true detachment. But you’ll also have no life. If you’re out and about, and have normal brain function, you’re going to care about stuff, and before you know it, life will get sticky.  That’s just the way it is, but that’s not all there is to it.

Anyway, back to my story. This morning, when I checked in at work, I had website issues that were out of my control. I had some people issues that had been weighing on me for a few days. And when I went for a dog walk, I had some dog issues. What are dog issues? Let me put it this way. My dog, a black lab named Mojo, has an appetite for things on the trail that you and I might not find so appealing. Let’s just leave it at that.

So there I was taking my morning dog walk, and several things I cared about were not going the way I wanted them to. I want to tell you the technical term for what was going on inside me at that point, and here it is. I had stuff coming up. Not, I was angry, or afraid, or worried, or anything else. Just, I had stuff coming up. If you could have looked inside my mind, you would have seen a lot of activity, none of it particularly helpful. If you had listened in, you would have heard a lot of mental conversations between me and whomever or whatever it was that was triggering my stuff. 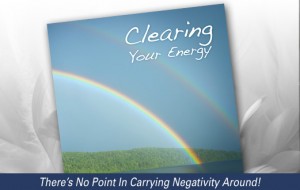 Once our stuff gets triggered, we can release it, and then we can have less stuff. Pretty simple. It’s cleanup, it’s maintenance, and releasing stuff makes life better.

On my morning dog walk, I pass through a gorgeous high desert country landscape with sunrise clouds, ravens in the sky, song birds, cotton tail rabbits, and a winding trail through sage, buffalo grass, piñon and juniper trees. It took me about 20 minutes of ruminating in my stuff before I realized where I was and all the beauty I was missing. But then I realized I was just mentally preoccupied with the stuff coming up inside me, and began letting it go.

I have a simple technique for doing that. I move my focus from my head into my spiritual heart, and take in the world from there. It’s a completely different perspective, and helps me make a dramatic shift inside. Sometimes I have to do that a few times, and hop back and forth, before it takes, and then I can really let go of the stuff that’s moving through. That’s what happened to me this morning. It took me 20 minutes, but made a huge difference for the whole day ahead.

I didn’t always know about this, know about letting stuff go, and know about moving into my heart. I think back to when I was a teenager, filled with emotion and wound up tight. It seemed like I would go for days under a dark cloud. I wish someone had told me about all this back then, but I didn’t get to learn these simple truths about life until much later. As the saying goes, I’m older, Budweiser. These are good things to know, in a whack a mole world.

I’ve developed programs like Heart Meditations, Clearing Your Energy, and many more, to help you make the world inside of you a better place. Thanks for listening.